The crux of our mission at SeedInvest is to simplify the investment process for both entrepreneurs and investors alike. Part of that simplification process depends on the entrepreneur’s access to capital, the primary obstacle for early stage startups. The Angel Tax Credit Act presents part of the solution to this issue. By widening the pool of investors while increasing the amount of capital available for startups, the Angel Tax Credit Act is a potential game-changer for startup financing and job creation.

The Angel Tax Credit Act would extend this success to a federal level, feeding more capital into our entrepreneurial communities, creating quality jobs on a national scale, and securing the American foothold as the global market leader for innovation. 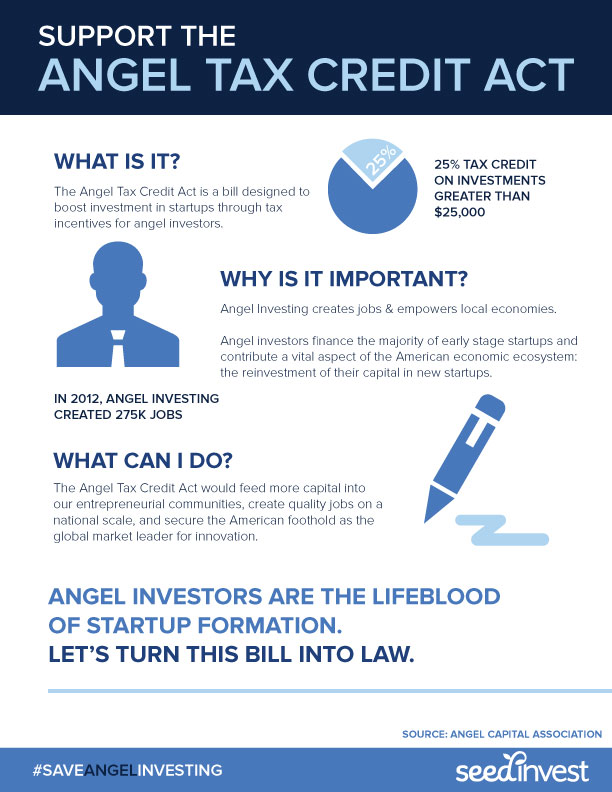 Why? American startup creation is on the decline. The Angel Tax Credit Act marks a definitive response to the recent decline in American startup creation. Early stage startups already endure an arduous process of raising capital, a harsh reality of entrepreneurism that often deters participation. Enter the Angel Tax Credit Act, which identifies access to seed capital as the primary ingredient for sustainable startup creation. In the words of Congressman Steve Chabot: “Right now, the biggest impediment to job creation confronting startups is the difficulty they experience accessing adequate capital to grow and expand. By incentivizing more investment by angel investors, this tax credit will help to provide the startup community with the needed capital to grow, innovate and create quality jobs across the nation.”

The bipartisan appeal of this bill is the widespread recognition of small business as the foundation for economic growth. Almost everyone can agree that American economic policy ought to prioritize small businesses creation—the debate revolves around how to best achieve that. How? Incentivize angel investors to invest more capital in startups. The Angel Tax Credit Act would allow angel investors to claim a tax credit of 25% for investments of $25k or more to high-tech startups based in the United States. The bill’s backers modeled the tax credit after Connecticut state law. Since its inception in 2010, the success of Connecticut’s tax credit mechanism is undeniable: 200 investments in over 50 companies by 90 angels; plus, in 2012 when Connecticut regulators lowered the angel tax threshold from $100k to $25k, overall investment pledges increased by 358%, rising from $2.4m to $8.6m. The effectiveness of Connecticut’s tax credit signals that a federal version would support further support startup formation. Economic power in today’s global environment increasingly depends on the high-tech sector. As a result, the most effective economic policies target job growth for engineers, scientists, and other technical positions—exactly what the Angel Tax Credit Act stands to promote. Angel Capital Association’s executive director Marianne Hudson highlights the attractive features of federal tax credits:

“Some studies have found that credits help attract new people to investing in startups, lead to more total investment dollars and also provide government returns in the form of employment taxes paid by the growing companies that benefitted from these programs.”

Who? Angel investors: the lifeblood of startup formation.

Angel investors finance the majority of early stage startups in the United States. The estimated impact of angel investing on job growth hovers around 275,000 new jobs for the fiscal 2012. Angel investors, often entrepreneurs themselves, contribute a vital aspect of the American economic ecosystem: the reinvestment of their capital in new startups. The inherent risk of such investments is certainly offset by its economic benefits for society. However, concerns such as new job creation and economic revitalization reach beyond the immediate financial interests of angel investors. Because angels support the American economy in ways with no immediate benefit to them as individual investors, the tax credit is a sensible mechanism in spreading the costs. Congressman Patrick Murphy explains the dynamic in terms of access to capital: “Startups and small businesses are the most efficient job creators in the United States. American entrepreneurs are known all over the world for their spirit of innovation and for their ability to quickly develop and commercialize new technologies. Startups are inherently risky endeavors and often cannot get a traditional loan from a bank. This is where angel investors step in – these individuals and small groups are willing to take the financial risk. Especially during this fragile economic recovery, angel investors are an essential piece of the capital ecosystem.”

Another reason for the immediacy of these angel tax credits is the absence of alternative channels of capital for early stage startups. Banks? Nope, too much risk. Government grants? Not enough cash. VC funds? Come back once you raise blah amount and generate blah interest, then we’ll talk. The initial steps of startups depend on financial support from angels—support that no one else is in a position to offer. Tax credits for angel investors help the cause in two ways: (1) they allot more money to angel investors to pump into the startup arena; (2) they encourage new angel investors to join the space. Senator Chris Murphy recognizes that “small businesses and startups are the backbone of our economy” and that “we need to be doing everything we can to help create jobs in high-growth industries, especially in fields like science and technology, where innovation is limitless.”

The Angel Tax Credit Act and its backers have their work cut out to turn this bill into law. With the success of credits on a state-level along with the bipartisan appeal of increasing startup formation, these credits definitely stand a chance. With the potential to increase startup formation, contribute to domestic job growth, and strengthen high-tech sectors in the United States, the Angel Tax Credit could be hugely beneficial for our economy. We here at SeedInvest support the committee’s objectives to help American startups and will stay involved through the process.