In a stunning development earlier today, the SEC released the final Regulation A+ equity crowdfunding rules under Title IV of the JOBS Act that pre-empts state law, paving the way for $50M unaccredited investor equity crowdfunding. Growth companies will soon now be able to raise up to $50 million from unaccredited investors in a mini-IPO style offering serving as a potential alternative to venture capital or other institutional capital. Imagine Uber or AirBnb, instead of going to big institutions for capital, now offering their stock directly to their drivers, riders, renters and tenants as well as the general public.

When the JOBS Act was passed in April of 2012, many believed that Title IV would actually be the most powerful change, but given that there was no deadline for implementation of the rules, most ignored Title IV as too remote to pay serious attention.  There was also concern about the same problem that haunts existing Regulation A, namely state securities laws that would require registration in every individual state where securities are sold, making it too expense/complicated to be workable. The infamous example of this was in 1980 when Massachusetts deemed the offering of Apple Computer stock to be “too risky” and did not allow its citizens to participate in the offering.

Last November, however, the SEC shocked the securities community by introducing Proposed Regulation A+ rules that, through a clever legal maneuver, pre-empted state securities regulation.

Since that stunning announcement, there has been great uproar about “pre-emption,” whether it is legal and whether it is appropriate for a federal agency to pre-empt the states in this manner.   Most in the pro-business community ardently support pre-emption and argue that securities offerings constitute interstate commerce and that state by state regulation is antiquated in a world where the internet blurs state lines. Many regulators, investor protection groups and even one crowdfunding platform opposed such pre-emption, arguing that state review adds value and necessary investor protections.   In response, the states introduced a coordinated review process, which was designed to address these concerns. Critics argued that this was too little, too late and only resulted from the states being forced to act by the threat of pre-emption.

In the final rule release, the SEC settled the dispute through a brilliant compromise by confirming pre-emption for Tier II Regulation A offerings up to $50M but also increasing Tier I Regulation A offerings from $5M to $20M and leaving pre-emption intact, thus giving “coordinated review” a chance to prove itself.   This appears to be the result of an extensive negotiation between Commissioner Stein who opposes pre-emption and several of the other Commissioners. In coming to this decision, the SEC noted that:

Now, with pre-emption under Tier II and coordinated review under Tier I, it looks like Title IV (Reg A+) could make Title III Equity Crowdfunding a relic.

Regulation A+ will likely go into effect 60 days after publication in the Federal Register (June 2015). Here are the highlights of the new Regulation A+ exemption:

The Fate Of Title III

Check out this chart comparing Reg A Tier 1, Reg A Tier 2, to Reg D: Rule 506(c) and Regulation Crowdfunding. Choosing among the various options will require careful consideration by issuers and their counsel. 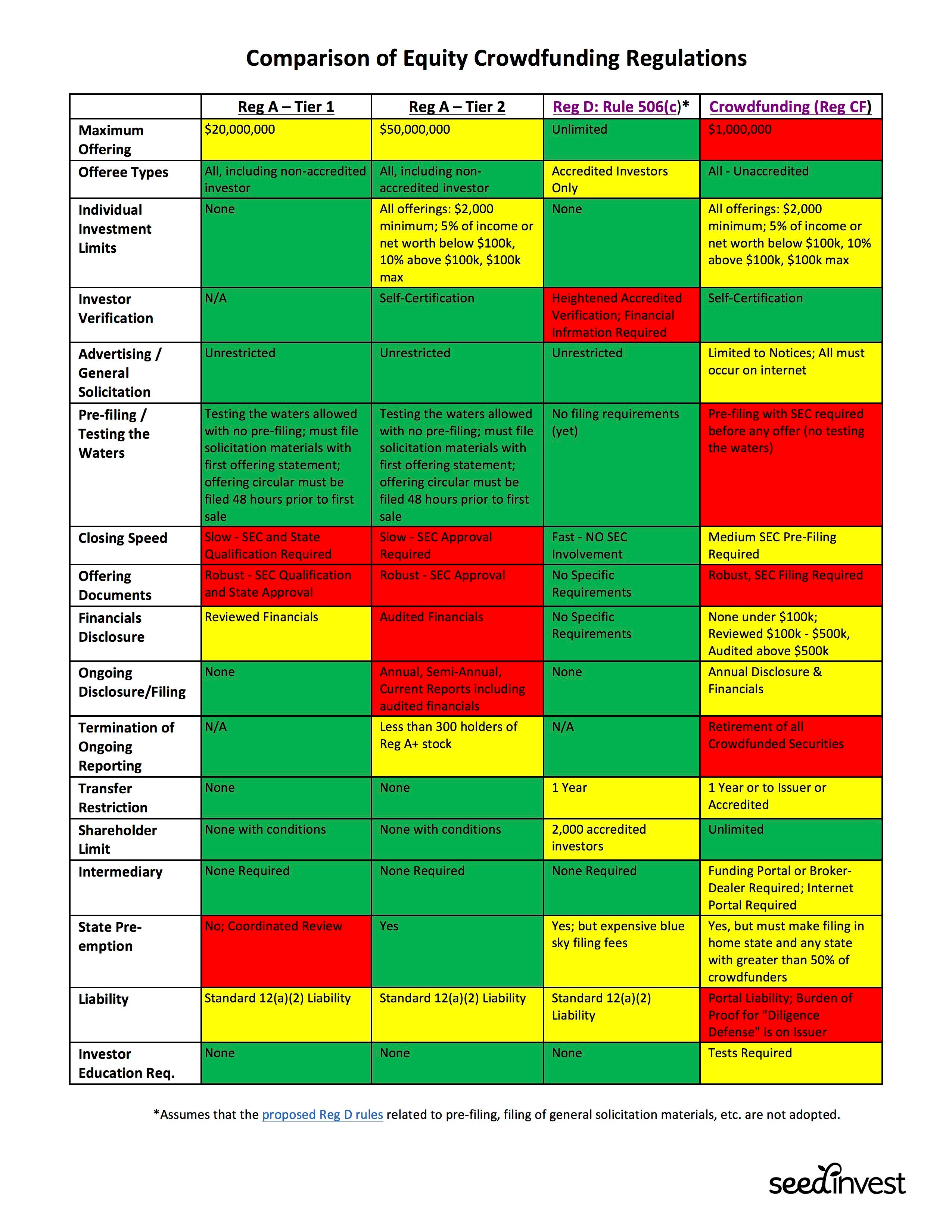 You can also download the PDF version of the Comparison of Equity Crowdfunding Regulations. Which exemption would you use?