Moe Ansari: Welcome back everyone to MarketWrap, I’m Moe Ansari and you’re tuned in to MarketWrap, as you have been doing for over 25 years now. As always, wherever you are across the nation (and even in the Hawaiian Islands) you can always pick up the phone, give me a call, and I will be more than happy to share with you my 38 years of trading experience. But for the next few minutes, hold your calls because we are going to go to our guest line.

On our guest line today is Ryan Feit; he is the CEO and co-founder of SeedInvest. Previously Mr. Feit worked at Wellspring Capital Management and Lehman Brothers where he invested in, financed, and managed dozens of private and public businesses. He was instrumental in the passage of the 2012 JOBS Act, which changed 80-year-old U.S. securities laws to make it possible for entrepreneurs to raise capital over the internet. Since them Mr. Feit has worked closely with the SEC and FINRA, the White House, and the Treasury Department on its implementation. He is frequently quoted in the Wall Street Journal, CNBC, Fox Business and the Economist among others. Mr. Feit is also a columnist for Fortune Magazine and Inc. Magazine. Mr. Feit, welcome to MarketWrap.

Ryan Feit: Thanks for having me Moe, and thanks for that great introduction.

Ryan Feit: Historically, investing in startups and small businesses has been reserved for just accredited investors or the wealthiest 2% of America. Now as a result of the JOBS Act rules that just went into effect, the number of potential investor’s increases from just 370,000 accredited investors nationwide, to 240-million Americans that can invest in private companies for the first time. This allows investment in private companies by ordinary Americans for the first time and allows them to do what the VCs have been doing for years.

There are a lot of people out there that have always wanted to invest in companies early on but haven’t been able to invest. This is really interesting for people because the returns in venture capital are much better than most people think. A recent report that came out showed that the average return for VC has been 21% per year over the last 30 years, compared to just 11% for the stock market.

Moe Ansari: A venture capital investor knows the industry, they know what’s going on, they go do the research. If somebody just puts something up on the internet and says I’ve got a great company that’s going to replace Google, fund me. How can people differentiate and say this is not going to work or this is going to work?

Ryan Feit: That’s a great question. One of the big value adds of our company, SeedInvest, is that we have historically only accepted 1% of companies that have applied on the platform. We do our own vetting and independent due diligence, before we open up any opportunities up to our investor base. For investors who are looking to invest for the first time we filter out 99% of the noise and look to only provide our investors with companies that are investable versus a lot of the noise that’s out there with other platforms.

Moe Ansari: How does SeedInvest work? Do people pay a commission for every time they invest, do you get a percentage of the profits? How does it work?

Ryan Feit: We are a marketplace and we basically charge companies a small placement fee on whatever is successfully raised through our platform. Over the last three years we’ve only been able to work with accredited investors so we built up a network of 13,500 accredited investors who are looking to invest in companies through our platform. Now with the recent changes in securities laws we’re going to be able to open up investing to everybody else, to ordinary Americans. We get paid by companies a small percentage of whatever is raised on the platform. It’s similar to how Kickstarter operates with donation and rewards crowdfunding. Except that with SeedInvest, investors are able to actually get a piece of equity in early stage companies, as well.

Moe Ansari: In a recent article which outlines five major developments in the Title-III Equity Crowdfunding Rules, you said that SeedInvest only accepts about 1% of companies. How do you determine which companies? You said you go through the due diligence process, but what is that process?

Ryan Feit: At the end of the day, we’re looking to back businesses and not ideas and so we’ve developed an online application process where any company that’s looking to raise capital through SeedInvest will come to our website and answer the same set of objective questions, things like what is your monthly revenue, what is your cash burn, what’s your valuation, and based on the answers, our platform will automatically filter out about 80% of the companies that apply. After that, we typically eliminate companies that don’t have a large enough market opportunity, do not have a differentiated business model versus other people, don’t have the right management team, and then ultimately we’re looking at customer demand versus valuation. There are a bunch of the factors that we go through before deciding to allow a company onto our platform.

Moe Ansari: Do all companies like yours have different criteria for which company to accept? Are there any rules from SEC or FINRA that are set up for the selection of these companies?

Ryan Feit: Most other equity crowdfunding platforms out there are really just acting as listing services and take all companies that apply. Most of the other platforms out there are more like Craigslist where anybody can apply and then investors are sort of on their own. SeedInvest on the other hand is highly curetted and we actually are one of the few platforms out there that is actually a broker/dealer that is regulated by the SEC and FINRA. Because we’re regulated just like big banks we do have a much higher bar than other people in terms of due diligence obligations, which at the end of the day benefits our investor base.

Moe Ansari: How are the investors protected, how are their assets protected if they’re involved in this type of equity crowdfunding? What is there to protect the customer?

Ryan Feit: There are actually more protections for ordinary investors with the recent passage of Title-III than there are in the offline world. For starters, there are investment limits so that if you’re an ordinary American you can only invest $2,000 to $5,000 per year. The companies themselves must prepare a significant level of risk disclosure, so they must prepare a business plan and overview of the risks. The companies must also have their financial statements either certified, reviewed, or audited, and have ongoing reporting obligations. Lastly, the companies must go through portals such as SeedInvest which are registered with FINRA and regulated, so there are a lot of protections for retail investors that do not happen today with accredited investors who are investing offline.

Moe Ansari: Do you have any tips for investors who will be investing in startups for the first time? What are the basics that people should do and should not do?

Ryan Feit: Investing in startups is risky and it’s different from investing in public stock. There are three important tips that I always give to first-time investors: The first one is that diversification is absolutely critical, so unless you’re planning on building a portfolio of at least ten private companies, you shouldn’t be investing. Secondly, unlike a public stock (that you can turn around and sell the next day) there’s very little liquidity with private companies, so there’s no secondary market like in New York Stock Exchange or NASDAQ, so you’re really investing for the longer term (say three to five years). Then lastly, it may be a really good idea for investors to consider adding some private companies to their portfolio of stocks and bonds, but you really shouldn’t be exceeding more than 10% of your overall portfolio in private companies.

Moe Ansari: When does this rule take effect, the Title-III, the implementation of the JOBS Act?

Ryan Feit: The Title-III will kick in on May 1 2016, so it’s about six months away until it goes live.

Moe Ansari: What does this mean for the overall economy five to ten years from now? Do you think this will become a major source of funding for companies and cause a move away from traditional funding? Or do you think it’s just likely to augment the funding options that we have right now for companies?

Equity crowdfunding is going to allow startups and small businesses to raise capital in a new way and not be limited to things like bank loans and credit card debt and draining their savings in order to grow. Although the change will take some time, it really is a big win for entrepreneurs everywhere.

Moe Ansari: Your recent article on the Title III equity crowdfunding rules outlined five major new developments from the SEC ruling last week. Which do you feel is the most important of these five?

Ryan Feit: The biggest win that came out with the SEC’s final rules was that they determined that companies that are raising between $500,000 to $1 Million will not have to get upfront audited financials (if they’re raising capital through crowdfunding for the first time). Also on an ongoing annual basis, they are not going to be required to get reviewed or audited financial statements, and that is such a big win for entrepreneurs because the financial requirements previously are going to be too costly to justify the amount of capital being raised. At the end of the day in order for equity crowdfunding to be powerful, we really want the best companies to be able to use it and we want it to be cost and time efficient. Because we lowered the bar for upfront ongoing costs to companies, we are making this much more of a viable alternative way to raise capital.

Moe Ansari: Ryan I want to thank you for taking the time out of your schedule sharing this very innovative way of raising funding companies. This is the way we are moving, technology is moving, and the world is moving, so it’s something to pay attention to. Thank you again for being with us today on MarketWrap. 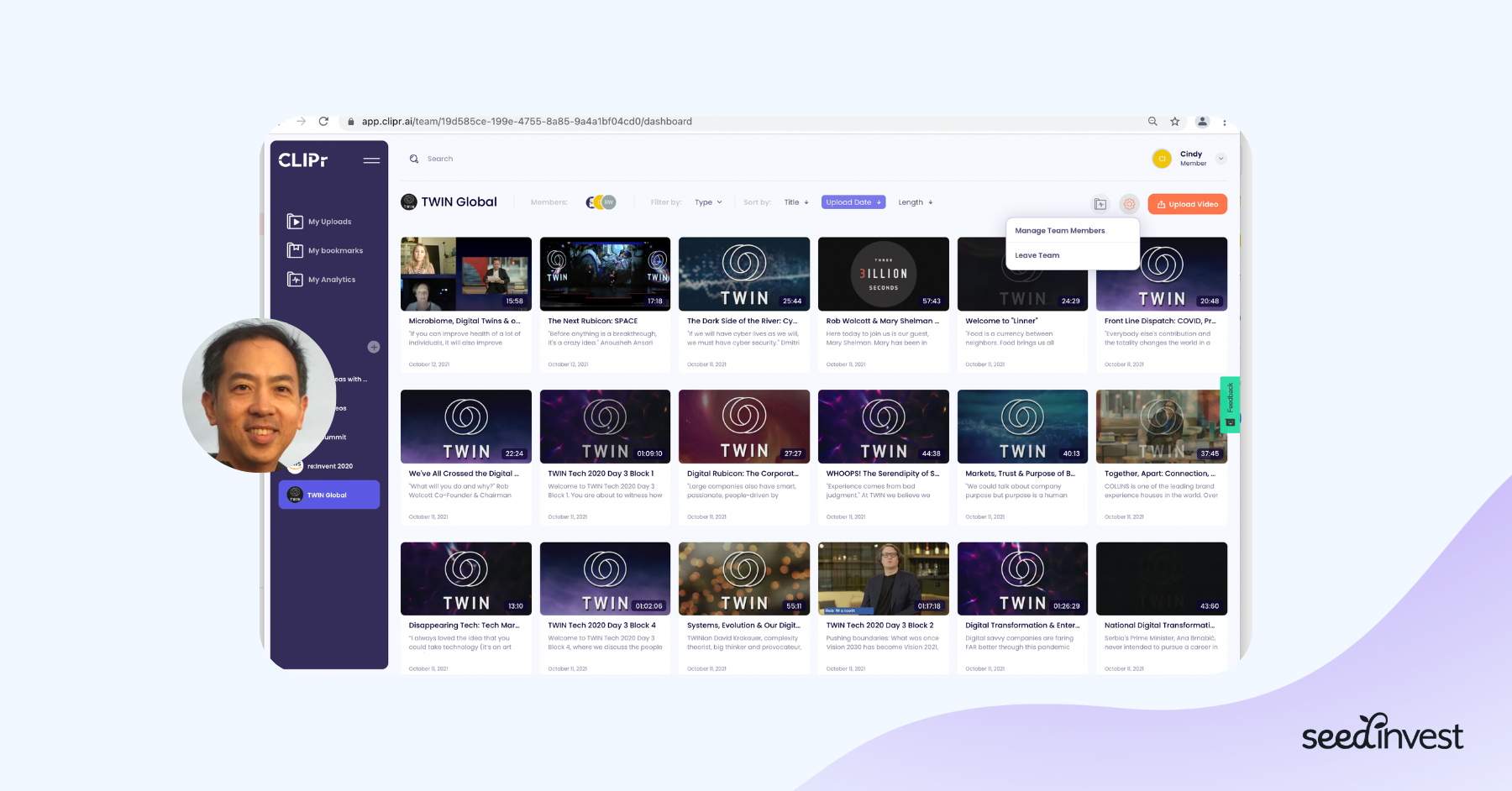