Today SeedInvest submitted a Comment Letter to Washington State as the coordinator of the North American Securities Administrators Association addressing concerns about the filing requirements for “Testing The Waters” under Tier I of Regulation A. NASAA is looking for feedback and your Support Letter could be the thing that makes the difference.

The Comment Letter addresses serious concerns about the viability of Tier I as a long term option for raising capital under Regulation A. SeedInvest Comment Letter To Washington State (PDF) 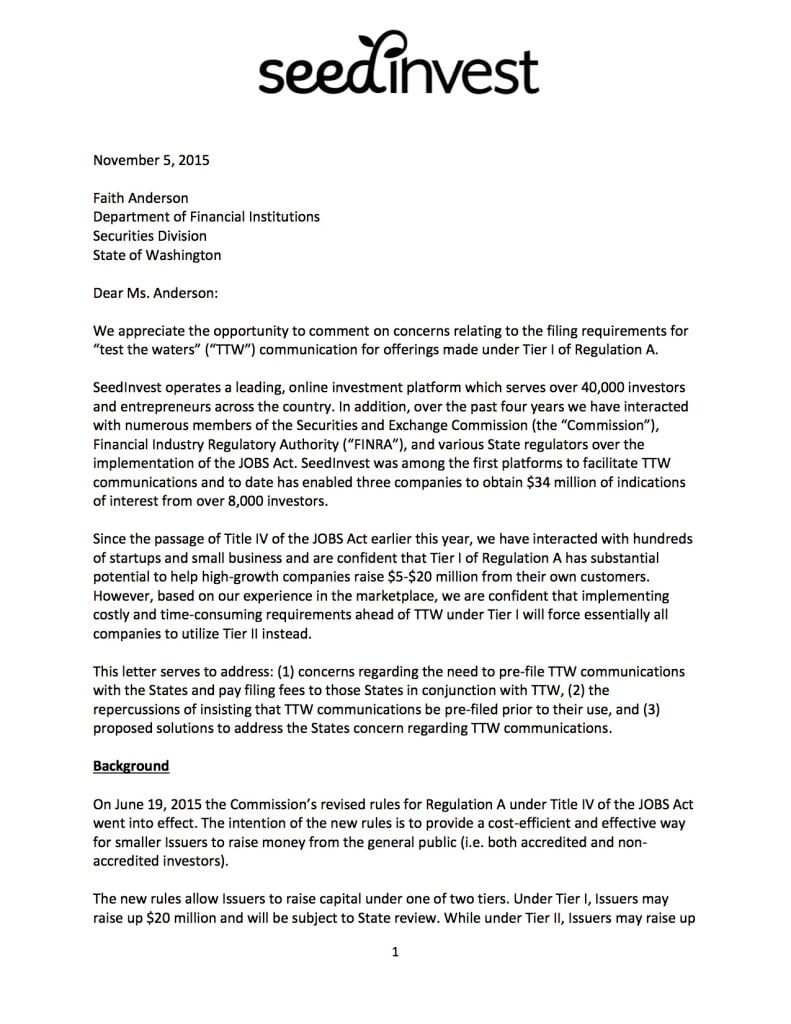 We appreciate the opportunity to comment on concerns relating to the filing requirements for “test the waters” (“TTW”) communication for offerings made under Tier I of Regulation A.

SeedInvest operates a leading, online investment platform which serves over 40,000 investors and entrepreneurs across the country. In addition, over the past four years we have interacted with numerous members of the Securities and Exchange Commission (the “Commission”), Financial Industry Regulatory Authority (“FINRA”), and various State regulators over the implementation of the JOBS Act. SeedInvest was among the first platforms to facilitate TTW communications and to date has enabled three companies to obtain $34 million of indications of interest from over 8,000 investors.

Since the passage of Title IV of the JOBS Act earlier this year, we have interacted with hundreds of startups and small business and are confident that Tier I of Regulation A has substantial potential to help high-growth companies raise $5-$20 million from their own customers. However, based on our experience in the marketplace, we are confident that implementing costly and time-consuming requirements ahead of TTW under Tier I will force essentially all companies to utilize Tier II instead.

On June 19, 2015 the Commission’s revised rules for Regulation A under Title IV of the JOBS Act went into effect. The intention of the new rules is to provide a cost-efficient and effective way for smaller Issuers to raise money from the general public (i.e. both accredited and non-accredited investors).

Under both Tiers, the Commission has provided for an exception from Section 5(c) of the 33’ Act (the “Act”) for communications that fall under Rule 255. Rule 255 allows companies to TTW and gauge market demand for a potential Regulation A offering prior to proceeding with the expenses and burdens associated with filing for regulatory review.

This means that Issuers could first TTW before being required to file with the Commission and incur the costs and expenses associated with such a filing. This provision allows Issuers who otherwise would be dissuaded from conducting a Regulation A offering to make an educated decision on whether it would be beneficial, before pursuing alternative means of financing.

As discussed above, Tier I offerings under Regulation A are subject to State review and as a result subject to State filing fees as well. The issue created is a result of the dichotomy between State and the Commission’s rules surrounding TTW.

Rule 255 exempts an Issuers TTW communications from the definition of an offer of securities under Section 5(c) of the Act. Therefore, under SEC Rules, an Issuer’s TTW communications need not be filed with the SEC and receive regulatory qualification prior to their use.

As opposed to SEC Rules, most States do not have a provision similar to Rule 255 that allows for Issuers to TTW prior to receiving regulatory qualification at the State level. In addition, most States define an “offer of securities” similar to that as defined under Section 5(c) of the Act. This means a majority of States would consider TTW communications an offer of securities without any applicable exception.

As a result, we are concerned that States may require Issuers to pre-file all TTW communications and receive pre-approval prior to first use which would create a meaningful, unwarranted bottleneck. In addition, we are concerned that States may require upfront filing fees in order to initiate TTW communications. The purpose of TTW is to provide a frictionless manner for Issuers to determine how much investment interest there is before proceeding down a costly and time consuming qualification path. Issuers should not be required to pay $20,000 or more and wait for approval for simply emailing their own customer base to see whether they have potential investment interest. This would effectively destroy all value of the TTW provision and force Issuers to utilize Tier II instead.

We do not believe it was the intent of Title IV of the JOBS Act to create such a clash between Tier I and Tier II offerings.

For example, smaller Issuers will be resistant to TTW under Tier I if they will have to: (1) pay State filing fees, (2) incur additional legal costs related to the State filing and review of TTW communication, and (3) deal with added logistical hurdles before even deciding whether to pursue an offering under Regulation A.

The ability to TTW prior to incurring significant costs and enduring the regulatory review process is a central tenet to Regulation A’s success. Inhibiting TTW will deter smaller Issuers looking to raise capital under Tier I. As a result, smaller Issuers may instead choose to raise capital either via a traditional private placement through Regulation D or under Tier II where State review is preempted.

In addition to the issues mentioned above, there is significant uncertainty when TTW under Tier I. For example, many Issuers remain unsure whether they wish to pursue a Regulation A offering under Tier I or Tier II prior to TTW. We have worked with Issuers which expected to utilize Tier II when sending out initial TTW communications but based on the results, decided later to pursue Tier I. Many Issuers specifically have the intention of using the results of a TTW campaign to guide their decision on which Tier to pursue. This creates confusion as to whether an Issuer must first file with the States prior to TTW in such a scenario.

In addition, there is little guidance on what would occur in a scenario where an Issuer initially planned to pursue a Tier I offering prior to TTW but later decides to pursue a Tier II offering after seeing the results of their TTW campaign. Would such an Issuer be reimbursed for any applicable upfront filing fees? If not, this will add an additional expense to an Issuers Regulation A campaign and provide another reason to forgo Tier I completely.

In response to the above-mentioned concerns and the States need to review TTW communications prior to first use, we propose the following.

We believe it would be fruitful to create a coordinated filing process, much like coordinated review, for which Tier I Issuers looking to raise capital under Regulation A may make a notice filing to the States. This notice filing would include the Issuers intention to TTW under Regulation A and include a copy of all TTW communication intended to be used. In addition, we believe the payment of filing fees should be delayed until an Issuer decides to pursue a Regulation A campaign and files their Form 1-A with both the Commission and States.

We believe this should alleviate the States need for review and Issuers concerns for TTW under Tier I of Regulation A.

We feel that if required to pre-file TTW communications for regulatory approval and review, and pay filing fees prior to first use, Issuers will abstain from utilizing Tier I as a meaningful means of raising capital under Regulation A. In addition, if required, we are confident that Issuers will be forced to resort to Tier II instead of Tier I, even for offerings under $20 million. We believe the above-mentioned proposal represents a meaningful compromise to address the legitimate need for State notice filings and Issuer concerns surrounding potential unnecessary friction to TTW under Tier I of Regulation A.

We look forward to the ongoing conversation and would welcome the opportunity to provide additional details to the Department and Staff.

How You Can Help: Your Support Letter

As an entrepreneur or investor, you have an interest in the success of Tier I as a viable option for American businesses. The State Regulators would welcome feedback from the general public on these issues. You can write directly to NASAA or sign a Support Letter that we’ve created to make it easy for you to show your formal support. 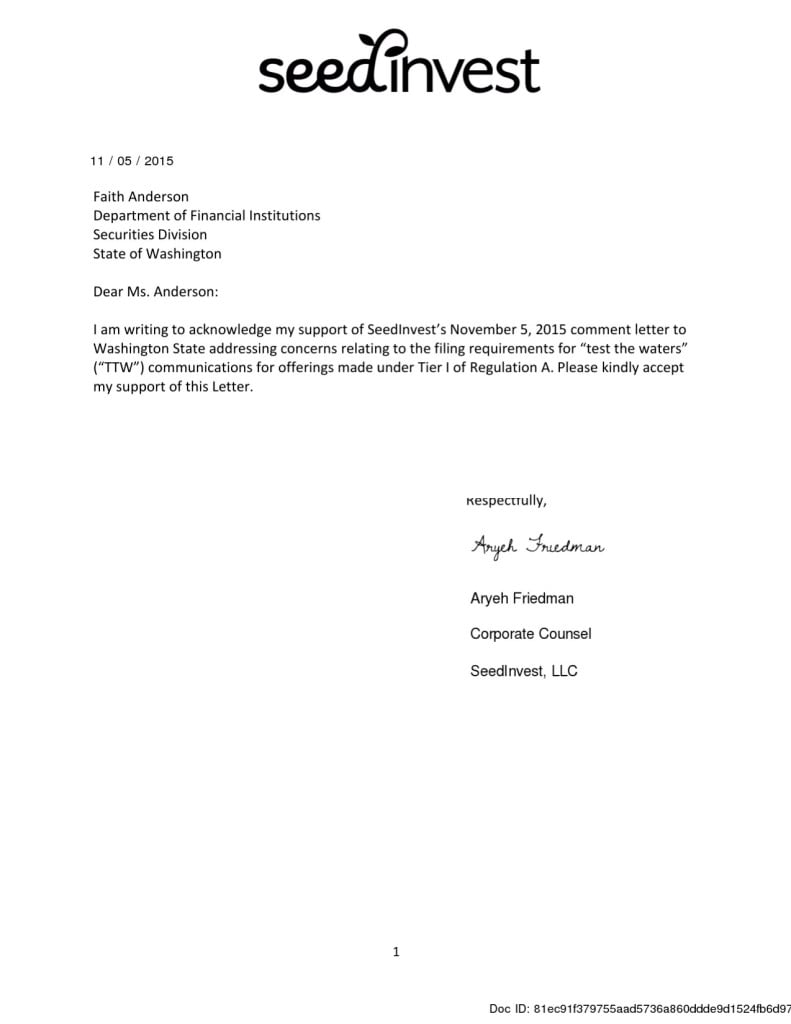 The Support Letter is on a website called HelloSign which allows you to read and sign the letter online.

Click here to sign a Support Letter and we will send it on your behalf to the State Regulators.