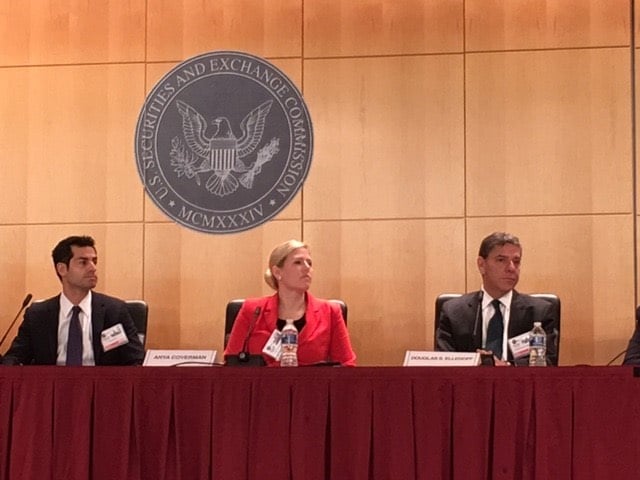 SeedInvest CEO & Co-Founder, Ryan Feit, submitted a Comment Letter to the Securities and Exchange Commission (SEC) in response to the SEC’s proposed amendments to harmonize, simplify and improve the exempt offering framework, announced on March 4, 2020.

RE: File No. S7-05-20
Proposed Rules on Facilitating Capital Formation and Expanding Investment Opportunities by Improving Access to Capital in Private Markets

We commend the Commission for taking a proactive approach to modernizing and improving U.S. securities exemptions. SeedInvest appreciates the opportunity to formally submit our recommendations and overall, we are supportive of the proposed changes set forth in the proposal. Furthermore, we urge the SEC to implement these changes expeditiously (especially increasing the annual offering limit for Regulation Crowdfunding to $5 million) given the meaningful, recent disruption in capital available to startups and small businesses due to the impact of COVID-19.

SeedInvest operates a leading equity crowdfunding platform which serves more than 350,000 investors and entrepreneurs across the country. SeedInvest issuers utilize 506(b), 506(c), Regulation CF, and Regulation A+ to conduct capital raises through our online platform and our broker-dealer, SI Securities, LLC. We were involved in the signing of the 2012 JOBS Act and, between 2012 and 2016, worked closely with the SEC and FINRA on the implementation of the JOBS Act.

Although there is no shortage of capital available to so-called unicorns (late-stage, billion-dollar companies), the same is not true for early-stage startups. In fact, seed stage venture financings have declined each year since 2014 and in 2018 were down a whopping 37% from 2014. [1] These seed stage financings fund the very same companies that go on to create thousands of revolutionary and life-changing technologies each year, so it’s critical that we make capital easier to access for early-stage companies.

This shortage of capital for startups has recently become much more acute since the onset of COVID-19. As a result of the COVID-19 crisis, there has been a meaningful disruption in the availability of venture capital seemingly available for startups. With less outside capital expected from pensions and endowments over the next couple years, venture funds expect to allocate more of their time and money to existing portfolio companies instead of deploying new capital. This means venture capital will be less abundant, will be harder to raise and take much longer to obtain. We’ve already begun to see the impact – U.S. venture capital investment volume was down 46% in April compared to March, and down 43% year-over-year. [2]

The good news is that unlike venture capital firms, online fundraising platforms are perfectly situated to help startups in the current, post-COVID world we are in. Online fundraising platforms are not dependent on capital from a handful of pensions and endowments, but rather a large, diverse network of investors. Also, while the traditional venture capital investment process is highly dependent on in person meetings (which is next to impossible at the moment), the online fundraising and investing process is inherently digitally native. But it is imperative that the SEC increase the annual offering limit on Regulation Crowdfunding to $5 million, as proposed, in order to make securities exemptions more useful for startups and small businesses.

Entrepreneurs looking to raise capital broadly for their startups and small businesses can turn to Regulation Crowdfunding to raise their first $1 million. As those companies grow, Regulation A+ can be a great tool for raising $20+ million, but it is an expensive, time consuming and burdensome proposition for raising less than that. Obtaining audited financial statements, completing a Form 1A, undergoing the lengthy SEC qualification process and then agreeing to ongoing, semi-annual public reporting is a lot to swallow for a company looking to raise $2 million or $5 million.

On November 17, 2016, we presented at the 2016 SEC Government-Business Forum on Small Business Capital Formation on this exact issue- that entrepreneurs who need to raise between $1-$20 million are currently not served by existing securities exemptions (see below an illustrative graph from one of the slides). This is especially true regarding startups and small businesses which need to raise between $1-$5 million. Over the last eight years, this is the range where SeedInvest has seen the most companies in need of capital and also where the cost and burden of utilizing Regulation A+ is the hardest to justify. A company that raises a $2 million seed round and has no interest in having its shares trade in the secondary market should not be burdened with the same requirements as a company which raises a $50 million “mini-IPO” and immediately lists its shares on an exchange or ATS. 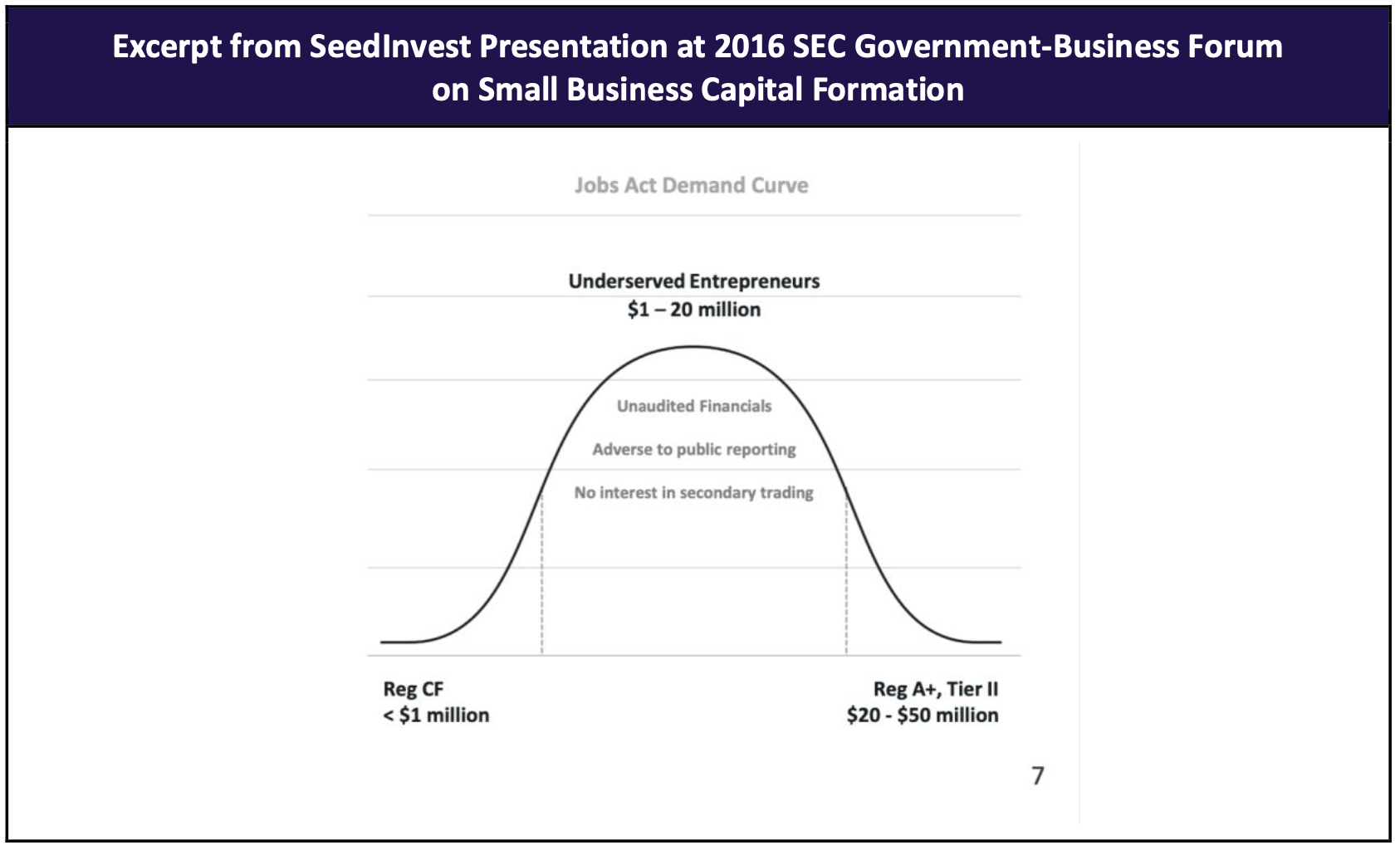 On July 19, 2018, we co-authored a letter to Chairman Clayton requesting the SEC to raise the Regulation Crowdfunding cap and followed that up with a petition that was supported by over 2,500 entrepreneurs from across the country. In that letter we pointed out that “in The U.S Department of The Treasury’s October 2017 report, A Financial System That Creates Economic Opportunities, Treasury recommended increasing the Regulation Crowdfunding cap.” Based on historical data that we point to in our petition, tweaking Regulation Crowdfunding to fill in the gap for companies looking to raise between $1 to $5 million would have a significant impact on new job creation without sacrificing investor protections.

In addition to raising the Regulation Crowdfunding cap, we also support permitting Regulation Crowdfunding issuers to “test the waters” prior to filing an offering document with the SEC. In fact, we recommended this in a comment letter to the SEC on January 22, 2014. As we pointed out in our letter, “we believe one of the biggest hurdles to making crowdfunding a viable option for small businesses is the cost and time burden that must be incurred prior to commencing an offering and prior to being able to gauge potential interest in an offering. Small business owners should not be required to gamble the upfront costs in the hope that their offering will be successful.”